Well it's been a long time we expect that famous duel. A few days before Bute-Pascal fight to be held on January 18th at the Bell Centre, several experts have stepped forward to say that it will likely be the most prestigious boxing match ever held on Canadian soil since June 20, 1980, while Roberto Duran won the title of world champion welterweight WBC (world Boxing Concil) and The Ring by unanimous decision against Sugar Ray Leonard at Olympic Stadium.

Two former champions “at home”
This fight really something for everyone and for many reasons, because this duel between two boxers who have been world champions. Jean Pascal was born in Haiti but raised in Quebec. From 2009 to 2011 he was crowned world champion WBC heavyweight. As for Lucian Bute, who was born in Romania and lived in La Belle Province for just over 10 years. However, his talent inside the ring, his kindness, and having chosen Quebec as adoption, quickly made ​​him the darling of the Quebec people. From 2007 to 2012, Lucian Bute was crowned world champion IBF (International Boxing Federation) to the category of super middleweights.

A friendly rivalry
Since Yvon Michel left Interbox group to start his own business, Yvon Michel, or GYM Group, the two teams have frequently been heated battle. Bute represented by the Interbox Group, and Jean Pascal represented by GYM, only confirm this fact, even if we talk more and more of a partnership between the two groups. Moreover, only a few days of fighting which was originally scheduled on May 23, Bute was wounded in the hand during training, an injury that had to require surgery and a discount of combat on a date subsequent to the disappointment of hundreds of thousands of fans. The clan Pascal (GYM) and took the opportunity to throw a few jabs clan Bute (Interbox) stating that Bute dragged this injury since 2011 and suddenly, on the eve of battle, he feels compelled to forfeit. This statement, which was aimed to challenge the courage and integrity of Bute, merely frothing enthusiasm for the shock of the century. Add to that the charges of coach Bute, Stephan Larouche, claiming that Pascal is a “boxer four rounds” and the bold prediction Jean Pascal saying it will end the career of Bute after their confrontation, and we probably will be entitled to quite a show.

Two styles like boxing: two different strategies
Both boxers are recognized as good technicians and strategists: they prefer to stay away, they are both very mobile and have good dodges, they have quick hands, they use the jab profusely, and they hit regularly in combination. However, Pascal is smaller (1.80 m) and will be heavier than Bute (1.88m) the night of the fight, since Pascal Boxing naturally at a higher weight. In addition, Pascal is certainly known for his flamboyant and charismatic personality, but for his arrogance and his boasting. It is therefore likely that it will be the aggressor in the fight, especially in the early rounds. Bute meanwhile, is known for its endurance, then try to survive the beginning of the engagement, where Pascal is known to go out in force and exhausting and Pascal before finishing.

Two boxers at crossroads
However, both boxers remain keenly aware of the challenge that this fight is for their careers. Although they have very different personalities, their roadmaps and their realities are nevertheless very similar. On the eve of his 34th birthday, Bute has no time to waste. He lost his IBF title after being bullied by a Carl Froch clearly superior to him 26 May 2012 Following his defeat by TKO against Froch, Bute has fought only once by getting a victory Denis Grachev unconvincing against 3 November 2012 Pascal, 31, known for his part a similar path. After beginning his career rapidly, multiple shoulder injuries, lost his title of world champion WBC light heavyweight in the hands of Bernard Hopkins aging, and long periods of inactivity since losing undoubtedly cast a shadow over his career.

When Alain Crest RDS asked Lucian Bute if possible defeat could jeopardize his career as much as that of Pascal if one of the two defeated lose, he replied: “It depends how you lose: if you get knocker early in the bout, it is sure it can hurt; but if you fight well, not necessarily. “See you this Saturday for the outcome of this epic duel. Good fight! 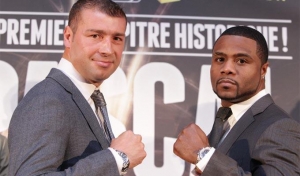