Banksy is a mythical character of the graffiti industry. His true identity is unknown. Nobody knows who he truly is.  According to people, he is a man in the 40s from Bristol in the UK. People say that he is white, tall, black, slim, tiny, right-handed, left-handed, red-haired, brown, blonde. Indeed, no one has really seen him properly. Apparently, he rarely goes to his exhibitions, and when he attends, he disguises himself so no one would recognize him. 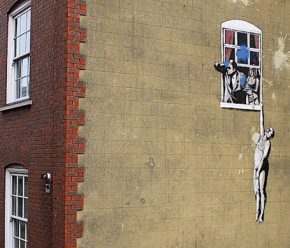 Banksy uses art to express his dissatisfaction about social issues. His pleasure is to provoke society. He is a claiming artist who has carved a place among the giants of street art. Banksy first started in the industry in 1980, but he became an official graffiti artist between 1992 and 1994, and then he joined the group Bristol’s DrybreadZ Crew (DBZ).

To create his works, he usually uses the technique of stencils. Banksy creates characters in which he includes items that are not in the context at all. In addition to the stencils he carves by hands, Banksy uses spray paint, brushes as well as his imagination that never seems to get tired. 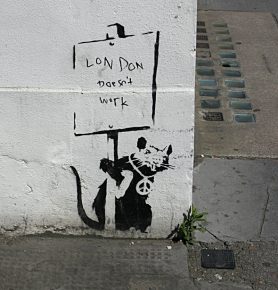 One of his most famous artworks is the Anarchy Rat who represents a rat holding a sign with an anarchic symbol on it. He illustrates quite often the symbol of the rat and the monkey because they remind him human traits.

His work Naked Man is painted on the wall of a sexual health center. This one represents a naked man hanging on one hand under the window of his mistress. Her husband is trying to find who is guilty.

Therefore, Banksy has a strong capacity to fascinate his public with his art. He claims, he makes you think, he shocks, but his messages launched are full of hopes.

As long as she can remember, Karolane has always been passionate about music. Her love for music is a mix between “no I have to start the song all over again because I missed my part” and “wow I can’t stop listening to it. I abuse”. Studying at UQÀM, she loves everything that is…