I had the chance to talk to Devon Slack over a delicious meal at the restaurant Aux Vivres in Montreal. A professional stuntwomand and actress as well as her boyfriend Thomas Liccioni also stuntman and producer. I find it so inspiring. They project a beam of energy and positivity . In the article that follows, I will introduce you to the life of a stuntwoman through the talented Devon Slack . 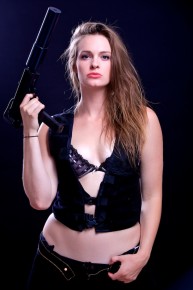 Devon first started acting when she was 12. At the age of 17 she decided she wanted to work in films. Randomly she met a crew member that worked in film. Since she was tall and active with a dancing background, it was brought to her attention she should be in stunts. It was very hard and physical, but she liked it. Devon moved to Vancouver and this is a where it all started. Nonetheless, she got her first role on the TV series called “Smallville”.

‘’You have to know the right people, when I came to Montreal I met some stunt performers who worked on the movie 300. And from there I met my mentor. I was really lucky with that.“

Devon is not only a stunt performer but also an actress which is pretty amazing in this business. We could consider her being the female version of Tom Cruise who also does his own stunts. Not only is she a tough warrior but she can also act the sexy roles as well. Look like a beauty, train like a beast is the perfect quote to describe Devon. She has everything and is already in the process of building an international career. In fact, Los Angeles seems to be the place to be for her and her husband. I’m telling you she has a promising career ahead of her. Actually, she already has an amazing career. Who wouldn’t want to work with her? She’s easy breezy and the sweetest to work with which is pretty hard to find in this business.

The life of a stunt performer 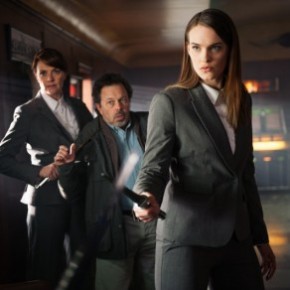 She risks her life every day. Jumps of cliffs, hit by cars, on fire, shooting, fights, etc… She admits she gets scared and is stressed before a scene but once they say action the adrenaline takes over and she forgets about everything. Being in stunts is not only about the physicality; it’s especially about the mindset. You have to be strong mentally to do this kind of work. ‘’Physically, when you do it you can handle it, but mentally, your brain will want to stop you.’’ – Devon

It’s a palpitating life. Adrenaline rushes. Traveling. No routines! And that’s something Devon loves. Everyday is different. You never know what your day’s going to look like. What’s your next movie, next scene or next stunt is? Nothing. It’s all about living in the moment.

As for training, Devon trains as much as possible not to be sore. Also since she works about 6 days a week while shooting a movie. In fact, she doesn’t train in a regular gym, she trains in an industrial garage where hockey players like Sean Couturier, Mathieu Perrault, Frédéric St-Denis and many more train called Warrior Institute in Drummondville. Check it out! http://www.institutduguerrier.com/

In a scene Devon had a tight and short dress and she had to enter a bar and start shooting the place up. She gets beat up while the place had many real explosions going off and glass splattered where she had to fall. Yes, she’s got bruises and everything. It’s a part of the job. It’s really dangerous even more for girls because of their costume which are most of the time minimalist (of course). Impressive, right?

Here’s a little anecdote about her on the set of the last X-Men. Devon liked Hugh Jackman since she was teenager.  She had the opportunity to meet him and get introduced through a mutual friend. They shook hands and had a great conversation. He was very kind and friendly and was impressed by her work. A teenage dream come true. How cute!

As for the future Devon as well as her husband Thomas, will be producing a new movie this spring with the director Stephane Beaudoin (http://www.stephanbeaudoin.com/#%21in-development/c18v2). The story is about a stunt girl/struggling mom trying to pursue her dream in the film industry and ready to do anything to make it happen. Another movie coming to you very soon is the one they shot not too long ago in Montreal. Here’s a preview of the trailer :

So proud of her, so blessed to know her. Who knows Devon may have her star on the Walk of Fame someday. Devon is the perfect example that wishes do come true even when you least expect it. Dare to dream big!

What you got to have to do that : a thrill for life, matter over mind, find the people that are working in the industry (stunts, producers, etc.), do your research on the business, and be patient (it takes about 5 years to really get into it).